The Friends of Markstakes Common, South Chaily, East Sussex just off the A275, meet on most Monday mornings at 09.30 at the gate in the flint wall in the lane.
They are a small conservation group formed in 2009 and inspired by the Group Leader, Rupert Hall and the Rangers.  They set out to survey and to conserve some of this valuable and ancient site.
Details at http://friendsofmarkstakescommon.weebly.com/ New volunteers are most welcomed.

Beautiful glades have been created and bracken and brambles hand weeded, creating habitats for bell heather to thrive.  This morning, a glade was weeded and this blog entry shows just a few of the creatures observed. 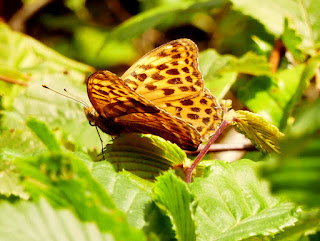 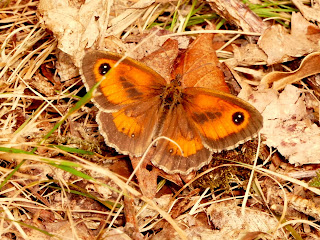 A Gatekeeper settled in the glade. 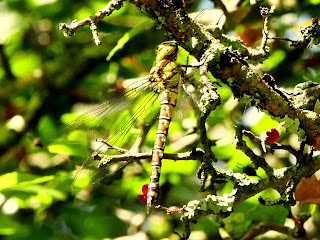 A dragonfly flew around and obligingly settled: a Migrant Hawker, Aeshna mixta. 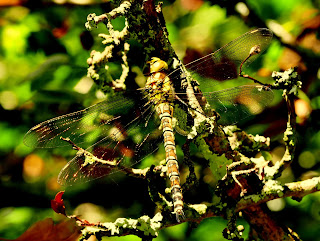 This is an early time of year to see this species.  See https://british-dragonflies.org.uk/species/migrant-hawker for more info'.  where it states the Flight Period: August to October (some individuals in July and November). 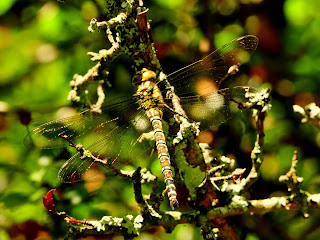 A Wolf was seen!
A Wolf spider, Pardosa sp. possibly. 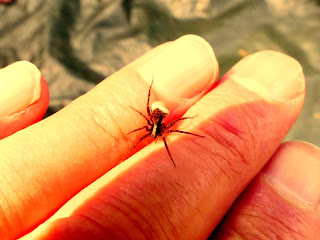 Here she is on my hand carrying her egg-sac. 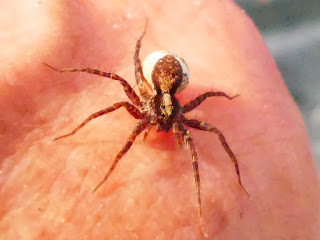 No web is spun to catch prey.  They run fast as we can testify and are difficult to photograph as a consequence. 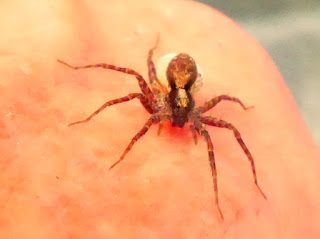 These spiders have eight eyes in three rows with two rows of two large eyes.  These four large eyes can be seen if you click on the pictures to expand them.  This mother is carrying her egg-sac attached to her spinnerets.  The spiderlings emerge and are carried around on her back for a few days before they disperse.  What a dutiful mother.
Posted by Sussexrambler