Lockdown Ramblings around Cuckfield: Lichometry, history and ornithology for children. 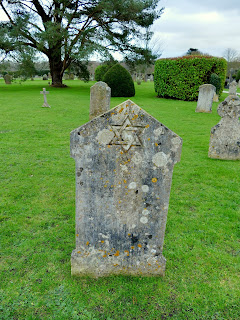 Yesterday was Holocaust memorial day.  This memorial in Cuckfield churchyard shows the star of David and family names Bray.  Their ancestors may have come to Britain in 1066 with William, Duke of Normandy [as may have mine].  Coincidentally the mausoleum of Cardinal De Braye in Orvieto from c.1282 uses numerous hexagrams.  The symbol was also used in Christian churches as a decorative motif many centuries before its first known use in a Jewish synagogue. Ref: Wikipedia
and Carole Tyrell's blog
There are several towns and villages in northern France and the south of Belgium called Bray, from which the names in this group may be derived. As a Jewish family name, Bray is documented in 1204 in Paris. Distinguished bearers of the surname Debre include the 19th/20th century French Jewish physician Robert Debre and the Jewish-born politician Michel Debre who was the Prime Minister of France from 1959 to 1962. Ref:https://dbs.anumuseum.org
The text on this gravestone from https://www.gravestonephotos.com/public/gravedetails.php?grave=450235 reads
Henry Boyd Thomas Moore
1863 5 1858 first name on monument
Thomas Moore
father of Henry Boyd Thomas Moore
Henry Bray
1872 64 1808 grand father of Henry Boyd Thomas Moore
Emma Bray
1889 81 1808 grand mother of Henry Boyd Thomas Moore
Kate Moore nee Bray
mother of Henry Boyd Thomas Moore
Now for parents wondering how to entertain and teach children: if you have a ruler how about recording the age of gravestones and the diameters and numbers of Lichen species?  Then see if you can plot a linear relationship: age v. diameter and species numbers.  Use pen and paper to record data and graph paper (make your own if needs be) to plot.  Is there a clear correlation?  In case not, it is still a useful learning curve that a failed hypothesis teaches the wide variations and difficulties of biological measurements.  With a tablet computer you can put data straight into an Excel spreadsheet and plot graphs.
What you will be doing is Lichenometry.
Inspired by BBC winter watch feature on birds at sewage works, this afternoon our local sewage plant was checked out.  No birds were observed in the works. 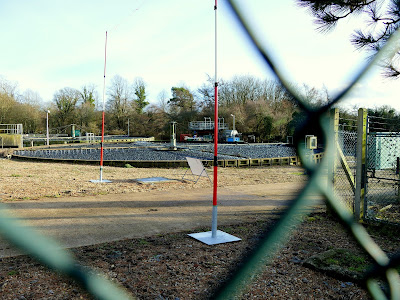 However... in the adjoining field were corvids: rooks, jackdaws and a magpie plus a solitary black-headed gull in winter plumage, i.e. no black head.  And a lone buzzard circled overhead. 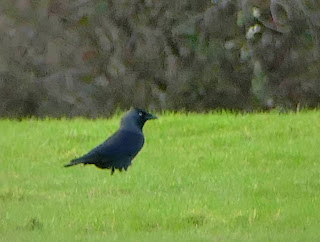 There is plenty to see and explore.
However, wait for a west wind before exploring the sewage works from behind the fence.
And whoever is leaving enormous piles of dog excrement on the track and in the field, please pick it up and dispose of responsibly as a courtesy to the many other walkers.
Click on any picture to expand it.  N.b. I am not responsible for the content to which this blog entry links.