Spiders and crabs are both arthropods.  That is they have a hard exoskeleton on their jointed legs and bodies, although the abdomen of spiders remains soft.  Hermit crabs occupy the empty shells of marine snails like whelks.

Now for the first time ever this behaviour has been observed in Cuckfield, where a cellar spider has adopted the exoskeleton of a ladybird for extra protection of its soft abdomen --  imitating the behaviour of hermit crabs. 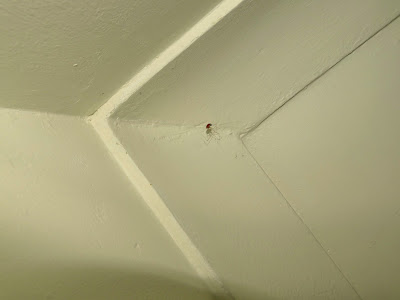 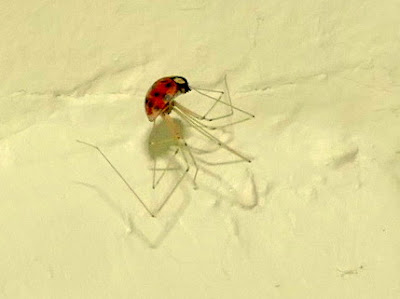 It was in Cuckfield that Dr Gideon Mantell named the Iguanadon fossil.  And according to Prof. A Rachnid from the University of Sussex "it is an astonishing coincidence that the small town of Cuckfield again features in a breakthrough observation of international significance."

Naturalist, Peter Lovett is thrilled with this worldwide scoop challenging conventional thinking in the world of spiders.  "I have been observing spiders for years" says Peter, "and this is something quite unique!"

See details of Peter's talk on Spiders at http://www.peterlovetttalks.co.uk/page14.html 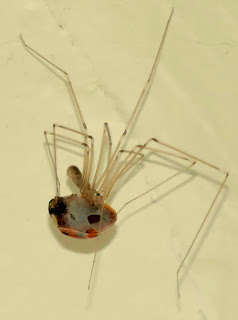 The spider was either biting the ladybird to suck up the juices later or enjoying the delicious ladybird cocktail now.
Posted by Sussexrambler