Fly orchids and the President of The Ramblers meets Sussexrambler. 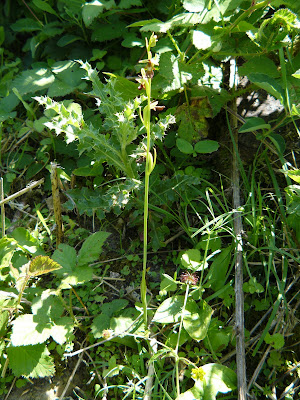 Last Sunday's walk was great, finding six orchid species.  Yet I was dissatisfied with my pictures of Fly orchids and I went back today to take more pictures with a monopod and some sheets of polystyrene to reflect more light.  I was not alone.  The BBC Secret Britain team were there with David Lang, the UK's authority on orchids.  The National Trust ranger was kind enough to show me this specimen.  And Julia was kind enough to have her picture taken with me! 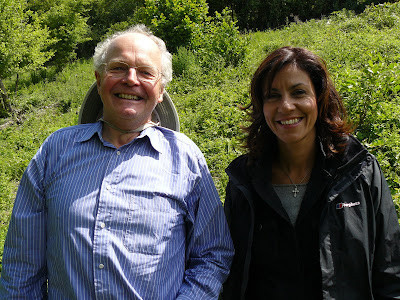 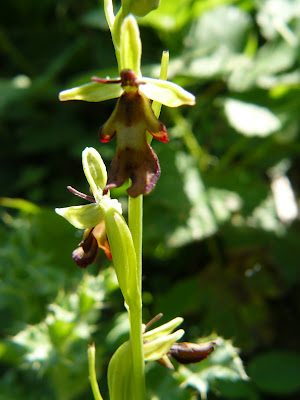 This is a much better shot. 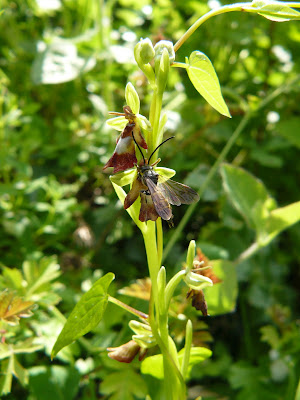 And here it is with a digger wasp.  Click on any picture to expand it.  David Lang told me that he had not yet taken a photo with this pollinating wasp and went back to try to get one.  I hope that he succeeded. 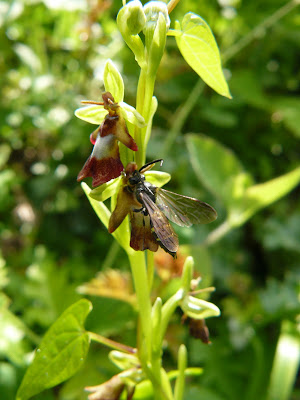 The male wasps, Argogorytes mystaceus are evidently fooled by pheremones and attempt to copulate with the flower, in the process removing the pollinia.  The female wasps emerge some days later than the males, but once the females are on the wing the males realise the error of their ways and leave the orchids alone.
Source; "Wild Orchids of Sussex" by David Lang, ISBN 0-9533493-3-0. 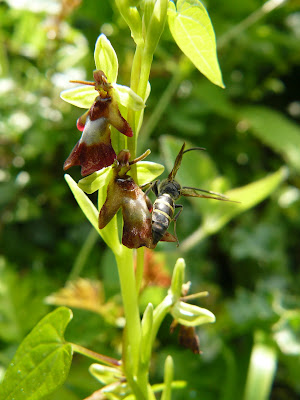 What a great day.  And I am really pleased to have got these pictures.  I am grateful too to Bernard Rickard, whose advice on the Leki monopod walking pole contributed to the clarity of these shots.  With the monopod, I suspect that the focus is greatly improved. 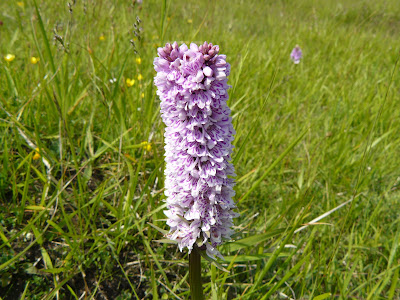 In the conversation with David Lang, I mentioned that last year I found a "double orchid flower", which is included above.  David said that this was very rare and that he had only ever seen one -- on Beachy Head. 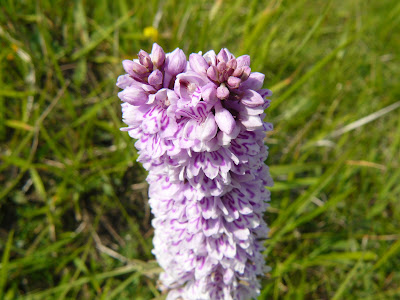 Well here it is.  Extremely rare.  And you saw it here first.
I rambled on hoping to stumble upon a Man orchid to no avail, but did take other pictures.
UPDATE:  In 2017 eleven orchid species were recorded on the hill thanks to conservation work by the Friends of Wolstonbury. 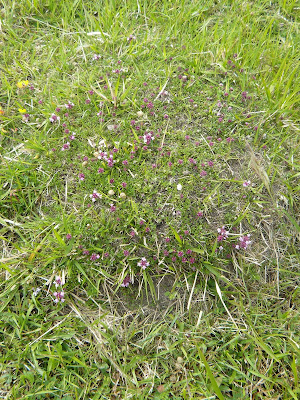 Wild thyme was flowering on the ant hills, each of which hosts an estimated 100,000 ants.
Green woodpeckers eat ants. 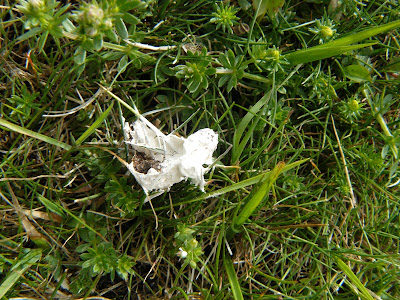 So you would expect to find Green Woodpecker droppings.... 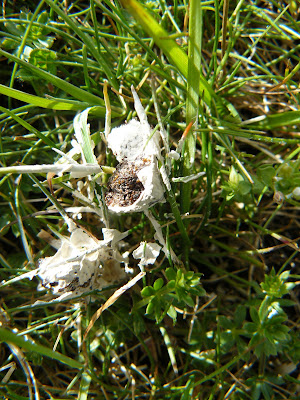 ...which, if you break them open, contain the empty exoskeletons of ants! 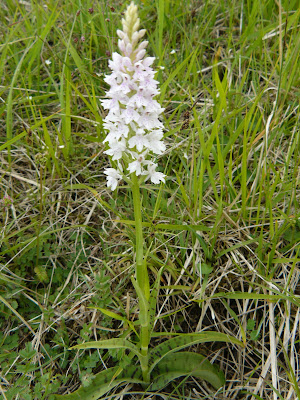 Common it might be, yet this white form of the Common Spotted-orchid stood out. 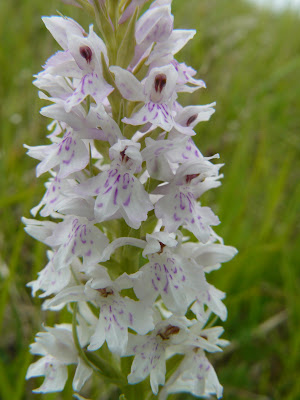 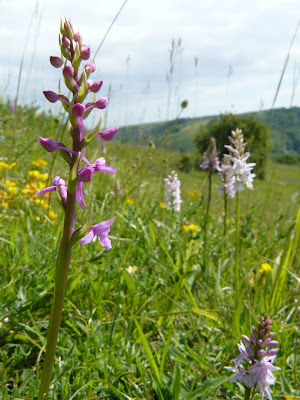 Fragrant orchids are abundant on the western slopes, together with the Common spotted ones and vetch. 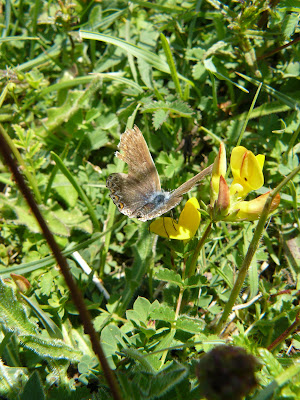 Butterflies are difficult to photograph and for me, difficult to identify.  This is probably a female "blue butterfly", but which one I can't tell. 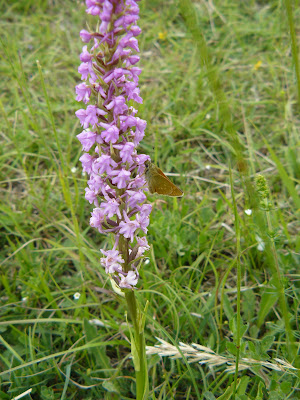 Above is the rare Silver-spotted Skipper.  Please see http://butterfly-conservation.org/872-790/silver-spotted-skipper.html  for more information. 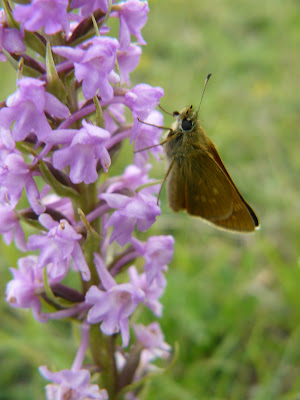 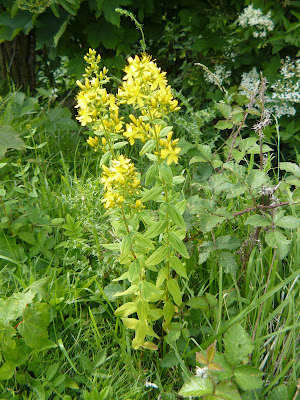 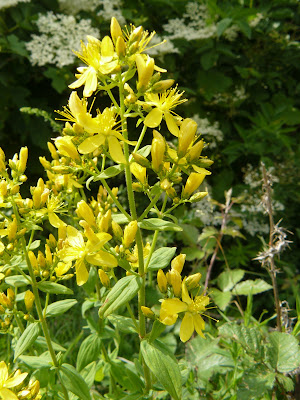 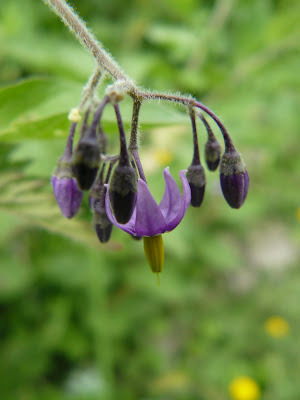 Stay clear of the Nightshade Bittersweet, whose eventual red berries are poisonous.
Posted by Sussexrambler