For the first time ever, the revolutionary Thomas Paine is honoured in Cuckfield with a rendition of "God save Tom Paine"

In February 1792 the landed gentry of Cuckfield met at The King's Head Coaching Inn, fearful of revolution in England they declared their support for the King and status quo.  The locals burnt an effigy of Tom Paine and sang "God save the King".
Thomas Paine was a driving force in the 'Atlantic-Democratic revolution' of the late 18th century, personifying the political currents that linked American independence, the French Revolution and British radicalism. 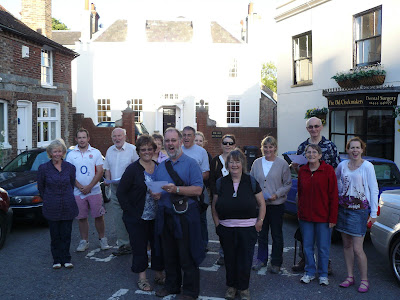 This evening, that insult to Thomas Paine was righted by the singing of the revolutionary anthem "God save Tom Paine" to the tune of "God save the King" in the Grand Place of Cuckfield.
One can postulate that this is the first time ever that this anthem has been sung in Cuckfield's High Street.
Click on any picture to expand it. 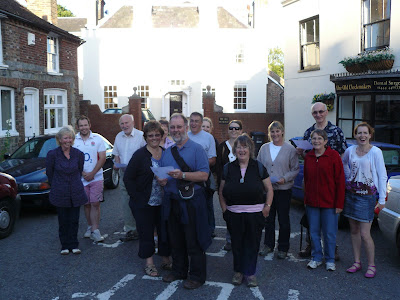 The first verse of "God save Tom Paine" - sung with revolutionary zeal was;


God save great Thomas Paine
His 'Rights of Man' explain To every soul.
He makes the blind to see
What dupes and slaves they be,
And points out liberty,
From pole to pole.
This was sung during a "Cuckfield Historical Walk 'n Talk" from the Mid Sussex Ramblers' programme of walks lead by me.  It was a light-hearted way of appreciating the deep political tensions of the time when Habeus Corpus was suspended in 1794 and "seditious meetings " banned.  Mid Sussex Ramblers wish to point out that "The Ramblers" is an apolitical organisation and does not support any revolutionary  movements in Cuckfield --- despite Cuckfield declaring itself "The Independent State of Cuckfield"!
Posted by Sussexrambler