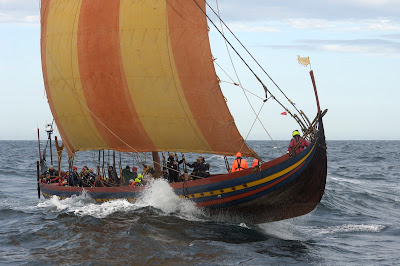 The weather forecast on Sunday 9 December 2007 was grim.
What 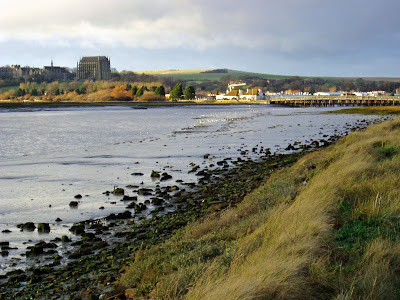 was it like when the Vikings first appeared in these waters, I wonder?  This picture is by Werner Karrasch by kind permission of and copyright of
The Viking Ship Museum in Roskilde, Denmark
www.vikingshipmuseum.dk
Some years ago I visited the Roskilde shipyard in Denmark specifically to sail in a replica Viking longboat. I was there early on a Saturday morning to beat the crowds of tourists.... but there was only me. It was necessary to wait until afternoon when I could join a hen party, whose idea of fun was the same as mine. So we rowed out of the harbour -- a group of young Danish women, me and the skipper at the helm. Life can be hard but someone has to do it. The skipper explained that the pride of the Danish nation depended on our coordinated rowing skills. Camcorders were running on the quayside as we slipped our mooring ropes! So I pulled with this clutch of lovely Danish ladies... for the sake of Denmark. What bliss. Once out the harbour, we hoisted the sail and we got a real feel of these magnificent vessels under sail.

By now, an experienced Viking, the skipper asked if I would do him a favour and crew with 3 Americans who wanted to sail later that day. A minimum of 4 oarsmen were needed to take a boat out. With already blistered hands and full of Viking adrenaline I willingly agreed and later found myself in a replica Icelandic whaler. Deep joy.
Such Viking longboats must have been sailed and rowed with the tide, up to Bramber castle. The Normans were Vikings remember. They just happened to speak French, having lived in Normandy for a hundred years or so.
With such thoughts in my mind and despite the weather, Shoreham resident Sally and I enjoyed a light lunch at The Sussex Pad (by the traffic lights on the A27 on the West side of the estuary), after which we braved the elements and set off down the side of the estuary to Shoreham.
Shoreham has a rich history. It is fascinating and I refer you to Andy Horton's extraordinarily comprehensive site about Shoreham at; http://www.glaucus.org.uk/Shoreham.html
But just look what the modern explorers in boat living have done! Click on these pictures to expand them. 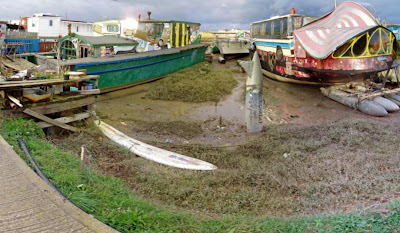 These Houseboats are awesome. 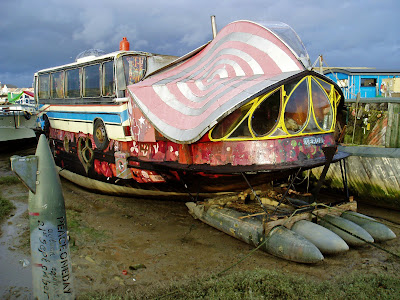 The extraordinary creativity to consider splitting a coach in half and mounting it on a boat is amazing enough. How do you manhandle such a thing into place and make it fast?

And then the rest of the artwork/architecture is beautiful and looks functional.

There are other historically very interesting ex-military boats on this stretch of estuary, which I didn't photograph on account of the poor light. I clicked these few shots when there was a fleeting shaft of sunshine. 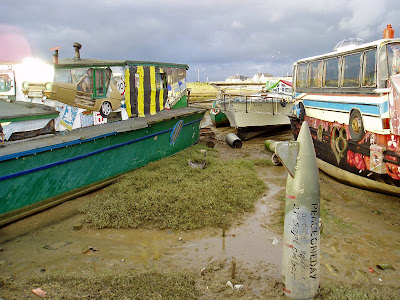 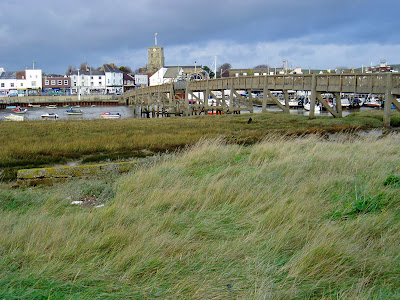 This is the view across the concrete pedestrian bridge to Shoreham.
The weather was overcast and far from ideal for photography. So my photos are sparse on this day. There is a fine picture of the church at http://en.wikipedia.org/wiki/Image:ShorehamChurch%28BobEmbleton%29Apr2006.jpg 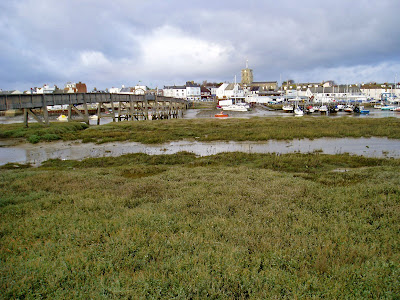 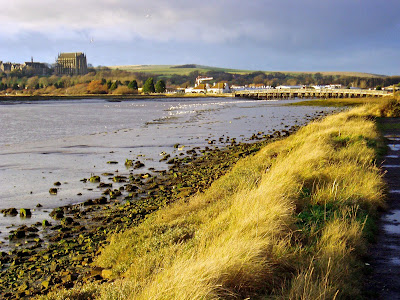 Thanks Sally, for leading a great walk on this rainy day.