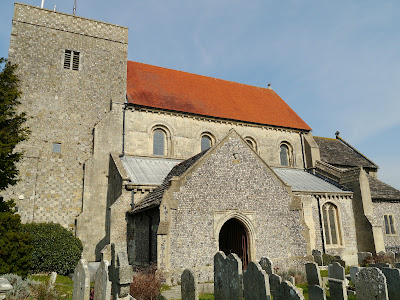 This 10 miles linear walk last Saturday, starts at the magnificent Norman church of St. Andrew's in Steyning.  On this day we parked in Shoreham and took the 2A bus from Shoreham to Steyning.
Details of an illustrated talk on these churches and the history of the Adur valley can be seen at
http://www.peterlovetttalks.co.uk/page6.html 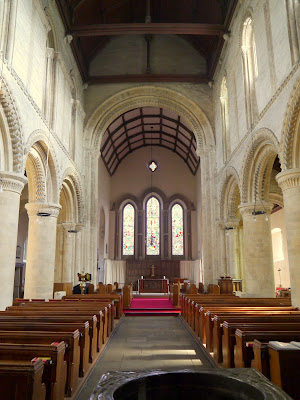 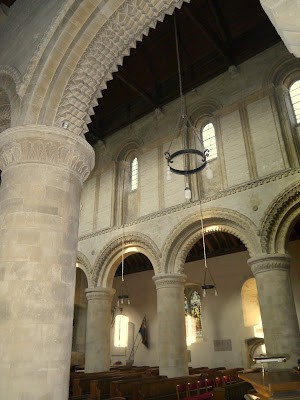 One can not help but marvel at the Norman stonework.  The monks from Fecamp in Normany had problems with William de Braose in Bramber, where the walk goes next. 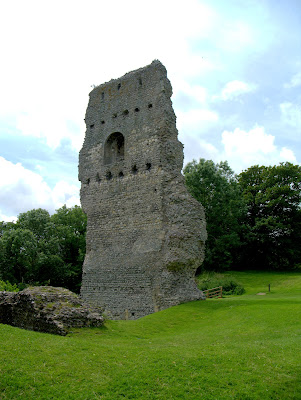 Just when or why Bramber castle was destroyed is not known.  The demise of the De Braose family is well documented.  The first William De Braose fought with William Duke of Normany, the Conquerer, who became king and gave the Rape of Bramber to De Braose. Subsequent Lords De Braose fought with King Richard in the crusades and became exceedingly wealthy under King John before a brutal demise.  Illustrated details of all this and seven churches of the Adur valley are in my 50 mins. talk on the subject. 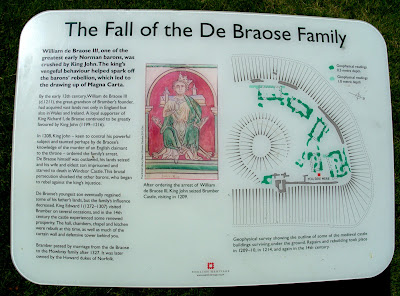 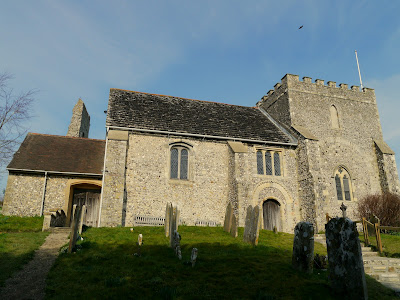 St. Nicholas church in Bramber was finished in 1073.  The south and north transepts are gone now. 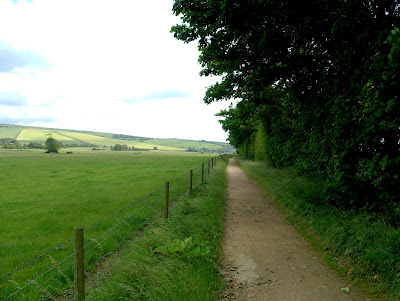 Leaving the river at Bramber, a flat path along the route of a disused railway leads directly to the Saxon church of St. Botolphs 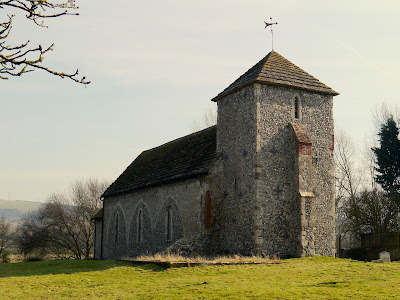 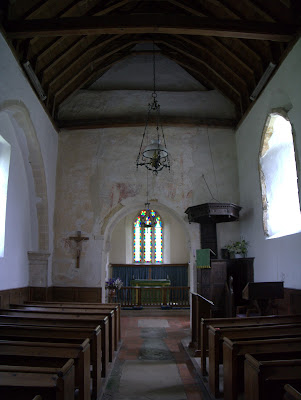 A short walk down the road there are more spectacular wall paintings at Coombes. 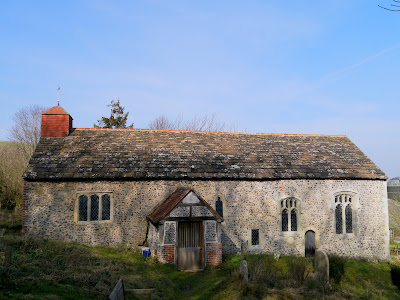 This church has a Saxon nave from 11/12th century. 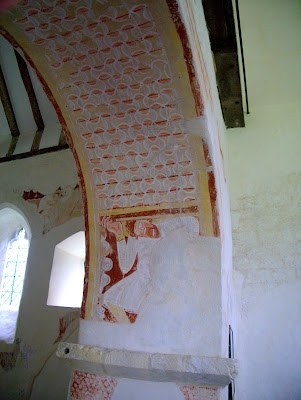 The above painting in the Byzantine tradition may date from as early as 1120.  The paintings were discovered in 1949. 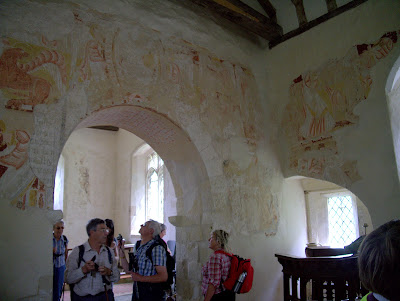 From Coombes a path leads southwards up and over Lancing Hill. 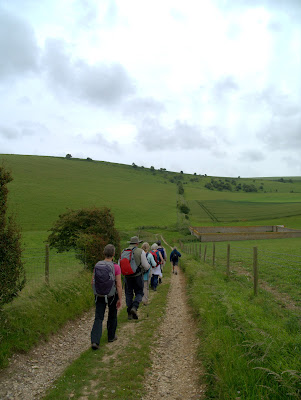 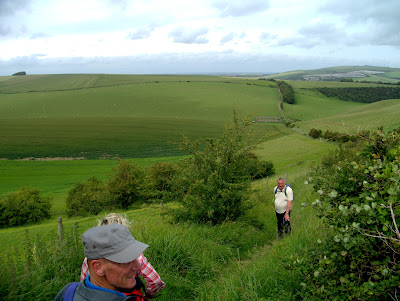 Fine views to the north after the climb up the hill.
Thereafter a steady descent back down to the river and the old wooden toll bridge. 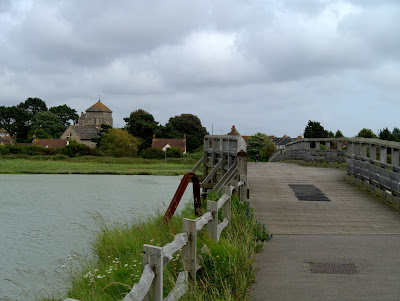 The nave of St. Nicolas church dates from 900AD, whilst the tower and transepts are Norman in the style of French architecture of the period.  See http://en.wikipedia.org/wiki/File:Fecamp_Abbey_Chevet10.jpg 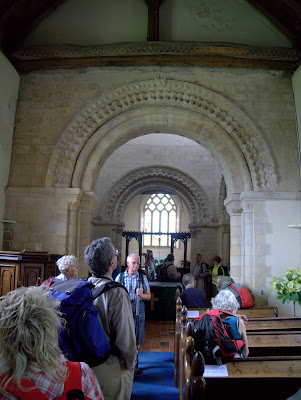 Note the cat in the top of the arch.

When the river Adur silted up, the port of New Shoreham took over the shipping trade and the magnificent church of St. Mary de Haura was built. 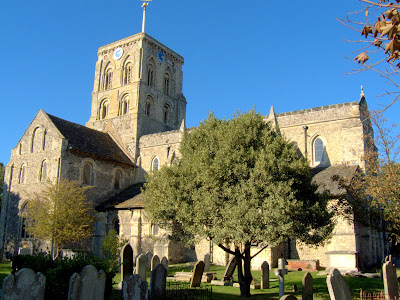 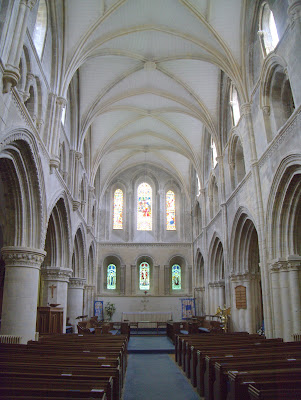 Built by William De Braose, the third Lord of Bramber, he lost favour with King John.
De Braose's wife and heir were captured by the King, imprisoned and starved to death.
De Braose was outlawed, yet escaped to France from Shoreham dressed as a beggar.

This blog entry can't reveal the beauty of these churches nor explain the rise and fall of the Norman De Braose dynasty.  My talk on the subjects covers the history of the valley and illustrates the evolution of church architecture from Saxon to Norman and early English, comparing for example St Mary de Haura in Shoreham with the choir at Canterbury cathedral.

I thought the most interesting church was the Sele Priory Church of St Peter-in-Beeding, in Upper Beeding, which I discovered by accident at the end of my walk from Shoreham. The churches at Coombs and Botolph necessitated walking along one of those fairly narrow country traffic roads without a footpath, but it wasn't too bad but not as nice as the path along the river Adur, which you have to leave to find these two churches. The walk along the river path is wonderful. Another time I tried to find Buncton Church, walking from Steyning along Mouse Lane, but this seemed impassable when I got as far as Wiston House, big sign saying private property, and no path around it. There was a plaque earlier on along Mouse Lane saying this was the path to Chanctonbury Ring, but the path seemed to stop at Wiston House. Maybe there was a path round it, but I couldn't find it. I was on my own, so not feeling too brave searching for paths.

The Botolph church was lovely too, very peaceful. Worth having to leave the Adur river path for.

Maybe a silly question but there was a plant growing a lot in the mud banks of the river Adur, that made me wonder if it was wild bilberry, something about the appearance of the plants, though I am sure it couldn't have been as there were no flowers let alone fruits on it, and I seem to remember that bilberry likes acid moorland soil, not chalk downland.

Yes it is Sea Purslane. I just looked it up on Google images. I also saw a lot of it growing on the banks of the river Cuckmere near Cuckmere Haven. It is apparently edible in theory, according to Wikipedia. That reminded me of somebody I was with picking a mussel off the coast of South Wales and cooking it, the cat wanted a sniff but decided against eating it.